ABOVE AND BELOW GROUND INSECT PROTECTION

Introducing the GrubOUT® U2 endophyte, a unique new endophyte providing host pasture grasses with above and below ground protection against serious insect pests.

There is also evidence that lolines may protect against root aphid, pasture mealy bug and soil nematodes.

Research has also shown that there may be up to 50% less damage of emerging GrubOUT® U2 seedlings under pressure from black beetle larvae compared with AR1 and nil endophyte over the first 25 days after sowing.

Other endophytes found in perennial ryegrasses don’t provide protection against root feeding insects such as grass grub or black beetle larvae. These insects can cause serious damage to our pastures.

GrubOUT® U2 containing pastures can still have populations of grass grub and black beetle larvae present in the soil beneath them. Because lolines act as a feeding deterrent, the larvae may still be present in the soil, surviving on other plants and organic matter.

Significantly improved persistence under insect pest pressure is a key benefit of GrubOUT® U2.

GrubOUT® U2’s tolerance of black beetle and grass grub has been dramatically reinforced in trials in the Waikato and Canterbury (NZ) recently, where all other ryegrass / novel endophyte combinations were ‘wiped out’ by these insect infestations, with severe plant pulling and plant death. There was little or no effect on the GrubOUT® U2 plants despite severe insect numbers.

At a Darfield (NZ) trial site, the GrubOUT® U2 grasses survived under populations of 500 grass grub larvae/m². (300/m² is considered a high infestation). 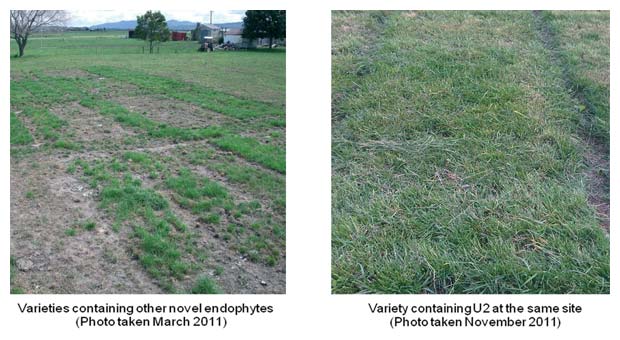 Some endophytes have been shown to have negative effects on livestock health and performance. But not GrubOUT® U2.

Worldwide research has confirmed that lolines which are contained in GrubOUT® U2 are safe for ruminants such as sheep, cattle or deer. (Lolines have not been known to cause grass staggers or heat stress either). This supports Cropmark’s own comprehensive research conducted in the laboratory and in the field.

GrubOUT® U2 is not yet recommended for horses.

In animal safety trials trials conducted by Cropmark Seeds over two consecutive years, the live weight gain of lambs grazing GrubOUT® U2 grasses was equivalent to those grazing Ultra AR1.

Given the unparalleled yield performance of Ultra, and that the AR1 endophyte is a proven animal-safe endophyte, this is an excellent result

Identifying insect pests prior to sowing
Insect pests (such as slugs, grass grub, black beetle, porina, field crickets and Argentine stem weevil) which are present in your soil or existing pasture can affect the establishment, production and persistence of any new pasture, including Barrier Combo™.  The small developing root systems of any young pasture plants are no match for high levels of insect pressure – even when treated seed is used, or where using pasture containing the GrubOUT® U2 endophyte.

Where insect numbers are very high, they should be reduced or eliminated through insecticide application, cultivation, and/or by first putting the paddock into a fodder crop to ensure optimum establishment.

Consult your animal health company representative for the appropriate insecticide programme for the insect pests present in your pasture. To reduce slug populations, ensure that the previous pasture cover is removed (eg buried through cultivation) and use slug bait prior to sowing.

Cultivation
A well worked, fine, firm and moist seed bed is the ideal to enable good seed to soil contact. Having a firm seed bed, with good seed-to-soil contact will aid speed of germination and establishment.

Full cultivation before sowing kills insect pests and is the recommended method where insect pest numbers are high.  Our experience is that best establishment results have been achieved by full cultivation prior to sowing Barrier Combo™.

If you intend broadcasting Barrier Combo™ seed, make sure that it is incorporated well into the soil.

Lack of soil compaction is one of the common causes of poor pasture establishment.  Where soil is light and fluffy (as can be the case where using power harrows for example), rolling with a Cambridge roller or equivalent is recommended to create a firm seedbed. This will enhance seed to soil contact which is critical for optimum germination and establishment.

Sowing
Barrier Combo™ should be sown at a rate of 25-28kgs per hectare. Always use treated seed where insect pests are present. Mixing other grasses with Barrier Combo is not recommended – it will provide insects with a safe feed source and could create pasture management issues due to Barrier Combo being so palatable relative to most other grasses.

Sowing Depth
Barrier Combo™ is best shallow sown to a depth of 1-2cm.

First grazing
As with any grass, the timing of the first grazing is critical to ensure he plant tillers out well. Use the ‘pluck test’ (ie. The leaf will snap rather than pull the plant out of the soil when pulled gently).
Barrier Combo™ is particularly responsive to nitrogen. An application of urea after first grazing is highly recommended. Once established, manage Barrier Combo™ as you would any other perennial ryegrass, although rotational grazing is recommended.

Palatability
Barrier Combo™ is an extremely palatable pasture. Stock will preferentially graze it to low residuals when given a choice of pastures, so opening the gates between paddocks could lead to overgrazing. Avoid overgrazing and rotationally graze where possible.
[/tab] [/tabs]