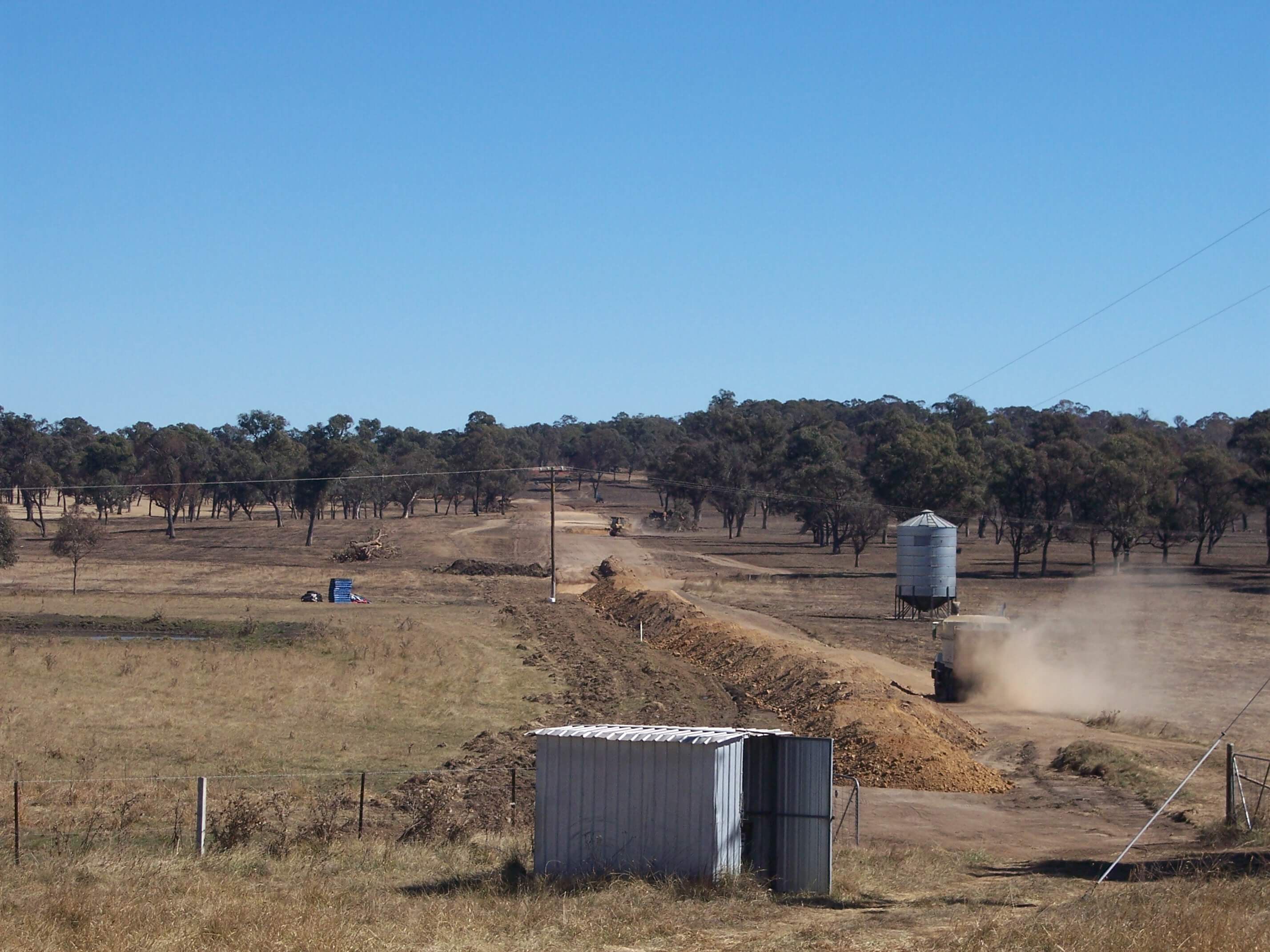 In early November 2007, I traveled to Armidale to talk at the Purkis Rural conference. Whilst there Rob Eccles suggested I have a look at Fred & Barbara Mulligans Dumby Park farm around 1200 acres just 16 km south of Walcha.

That Saturday Rob sent myself out to measure some trials at John & Jules Cordingley Topdale property, 50 km south of Walcha. There was plenty of grass growing, so I thought there was potential for the area. 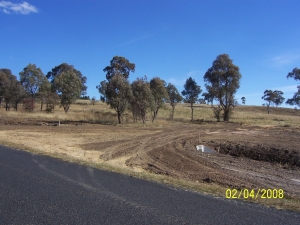 On the way back to Walcha, I stopped at what he thought was the Dumby Park property and inspected it from Thunderbolts Way. I could see good flat land, three phase power, realized there was good rainfall and also was aware the south-east Queensland milk supply was declining faster than the growth required.

After coming home to Poowong in West Gippsland, my wife Elaine suggested I take a proper look again at Dumby Park. After driving around with Rob Eccles, I believed in the idea to turn this farm into a Dairy farm.

There was good gravel tested by taking my shoes off and walking on gravel supplies and a reliable supply of water. Two things that were ultra important so I made an offer on the spot. 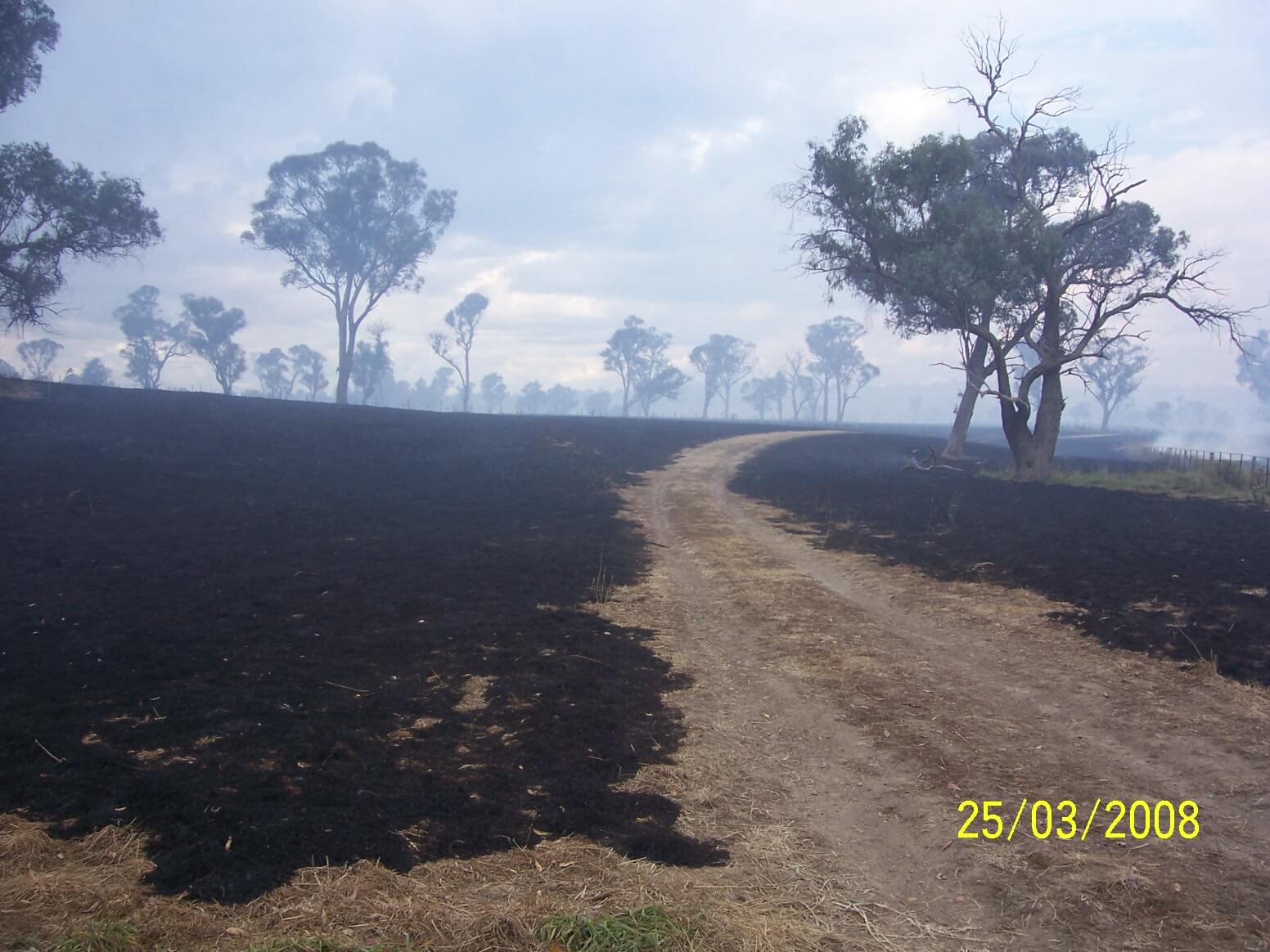 In the following weeks Scott Price of Rabobank and I had inspected the farm and visited Gerry Moran at the Walcha Shire Council. There was nothing but cooperation from the Walcha Shire with Gerry suggesting Walcha was the second quickest shire in New South Wales to get things done. We said we may be at in the wrong shire…

The task of developing a dairy farm began with Farm Mapper Peter Harrison flying to Armidale, hiring a bike, buying a bike & tools and borrowing a ute from Damian Timbs in late March. 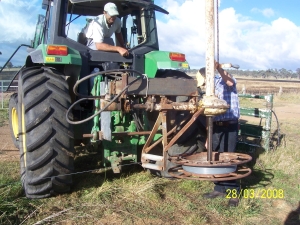 They arrived at the farm at the same times as Peter Best who had driven up from Gippsland.

Over the following days the farm map was planned with the aim to have the cows walking the minimum distance to and from the shed – with an average walking distance of 500m on this 1200acre farm.

A priority was to begin planting ryegrass, however we needed to remove all the long grass so we didn’t delay planting. We decided to burn a large area and we cut 500 bales of silage to get rid of all the cover.

Our neighbor Daniel Kermode was busy pulling down fences, and later gave us enough gravel to complete the main tanker track from Thunderbolts Way to Walcha Dairy. Fencing was done by Mick Morris and most posts had to be augured due to the rock in the ground

Major earth works included at the main entrance to the dairy off Thunderbolts Way, site cut for sheds, forming laneways from our gravel pits on farm and building main water supply dam effluent dam along with leveling trough sites. 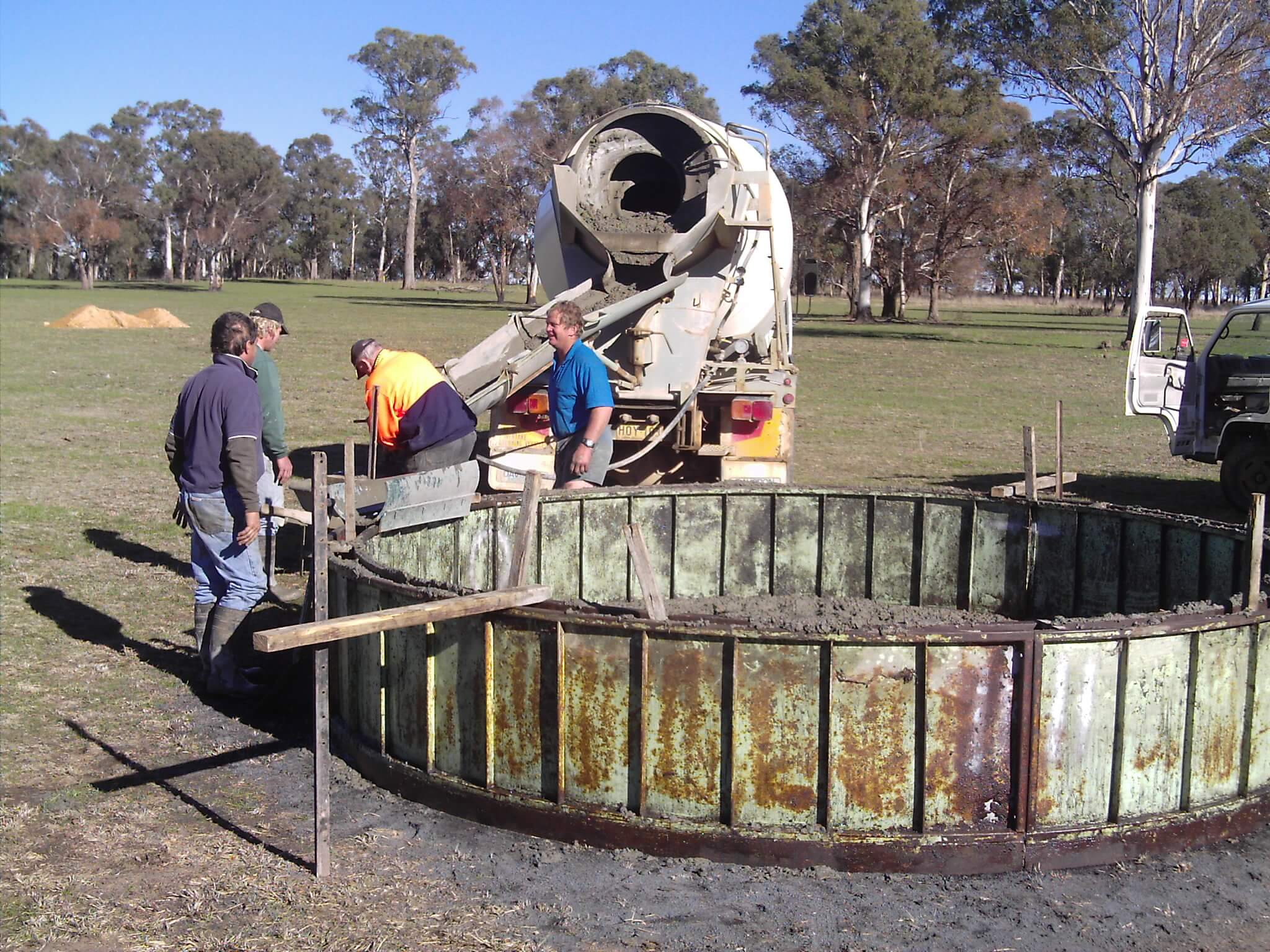 This work was mainly completed by Simon Wall with some help from the Walcha Shire Council. The laneways were designed to have minimal corners, wide gates and maximum flow.

The ripping in the 11.8 km water line with John Cordingleys D8 was a big day. We had Besty, John Scott, Charlie Cordingley and Carl Hindson and his crew from CIF Irrigation Cobram completing all the major plumbing, including the effluent system.

Water trough molds were trucked up from Leongatha South in Victoria with forty five two thousand gallon troughs poured on site at Walcha. Andrew Zuidema got us started and Danny Hoy made the rest. We also ensured there was lots lagging making sure pipes would not freeze. 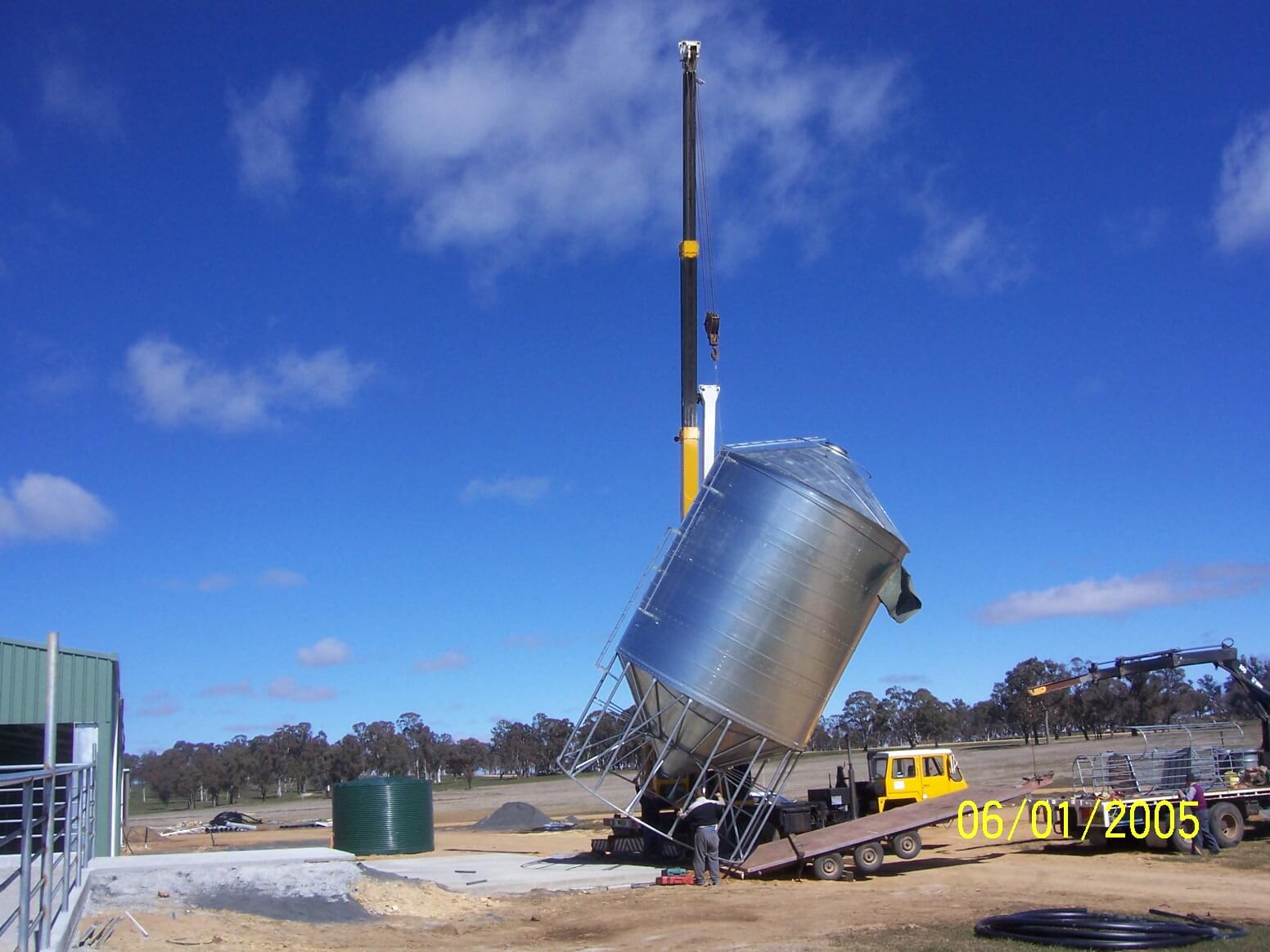 Over the next 154 days the farm had to be developed extensively, burning off and clearing dead trees, drilling new perennial ryegrass pasture blend of Vatbuster. We sent 20 tonne of ryegrass that April from Notman Seeds in Gippsland, sowing it with John Cordingley’s drill.

It was mostly sown during April with the three inch row spacing and was finished by early May.

The 80 unit rotary dairy construction was contracted to Yarroweyah Engineering and the milking plant to Westfalia GEA milking farm technologies.

Most of the planning was between myself, Pete Best, the farm manager, Adrian Kirk, Graeme & Stephen Hargreaves and Peter McGuire from Westfalia. Bill Hodgson from Raleigh installed the plant.

The calf shed was built by John Wall, silos tanks and pipes were all ready to be put in place and by now our seed business in Victoria had slowed down so Elaine come for her first visit to inspect her investment. 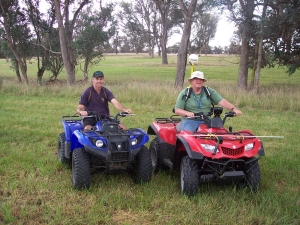 On her first night in Walcha it was – 9 ⁰c night and she said I am not coming back in winter. She was pleased she didn’t come at the start as she wouldn’t have seen any vision of how it would look.

My son Gavin come up helped make around 100 gates and fencing, Adam Fisher made a number of visits helping build the calf shed, pipe lagging, some cattle crossings and electric fence cables under gates.

At this stage while Pete Best making sure the finishing touches were being completed, John Crittenden had arrived as Dairy manager and the key now was to add fertilizer to insure feed cover after cows arrived.

We purchased around 800 milkers from six locations most in Northern Victoria and the Riverina, with Gavin and Adam tagging and vaccinating all the animals ready for transport. We had to make sure the healthy and the correct cows arrived in Walcha. 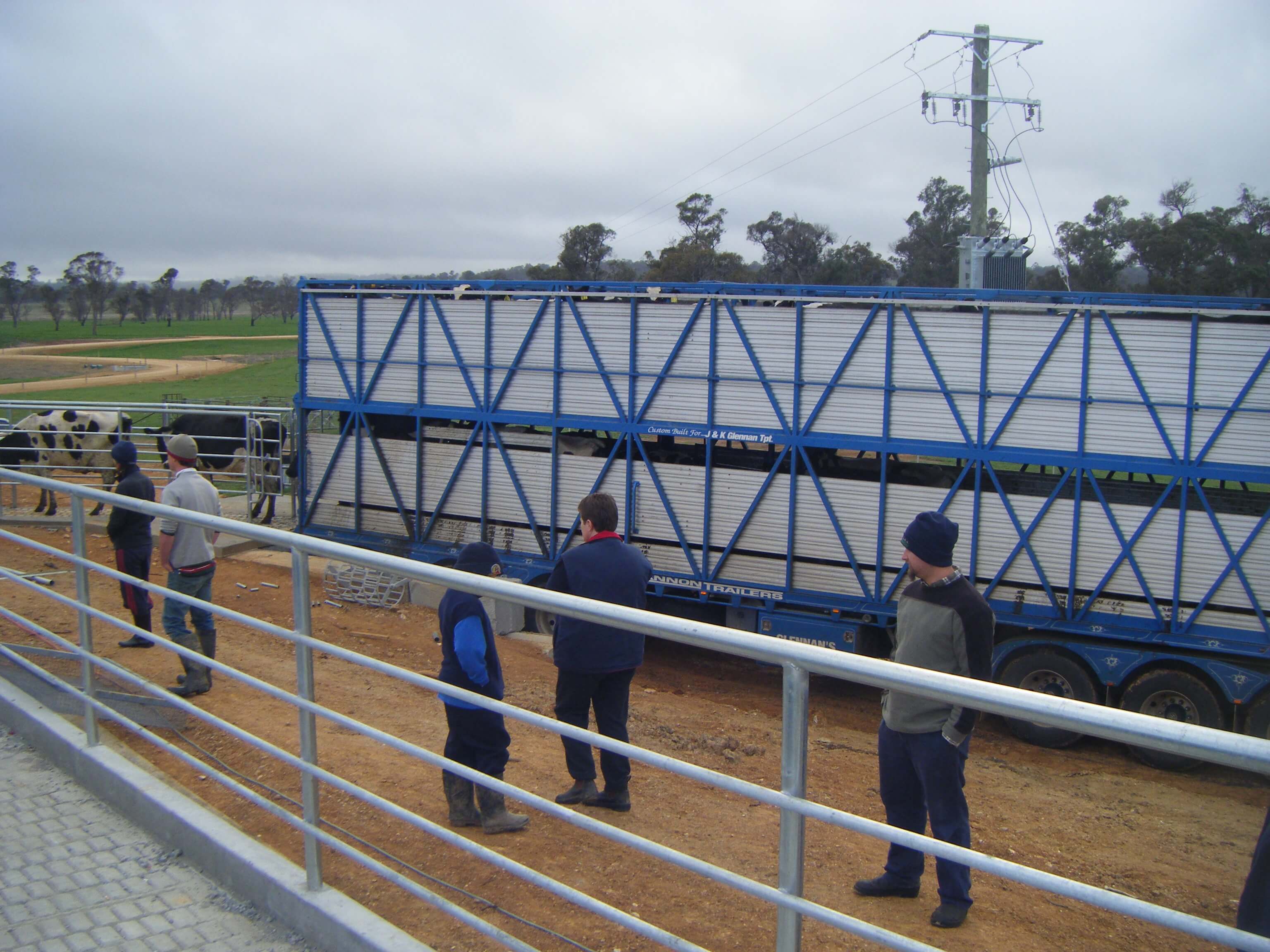 We arranged for the cattle trucks to arrive for the first milking early morning on the Thursday September 25th 2008 so the pressure was on everyone to make sure this worked, remembering that this is the only Dairy within a 100km radius.

Elaine and I left on the morning of the South Gippsland Dairy Expo, flying to Newcastle then driving up the range to Walcha to catch up with Pete Best, John Crittenden, Yarroweyah & Westfalia to get ready for the mornings first milking.

All the planning paid off with all 800 cows arriving at Walcha after the 1300km journey. We had finally reached our goal of establishing a dairy farm at Walcha.

The first load of milk was picked by Scott Harvey and sold to the Dairy Farmers Co-Op on the AFL Grand Final Day (we watched the Hawks beat the Cats).

By the time we started the first milking’s I had made fourteen trips to Walcha and along with Pete Best we were very proud of the development effort. 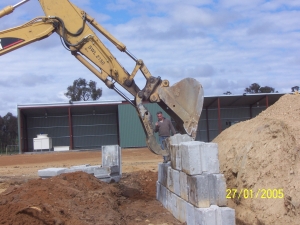 To this starting point neighbours, local farmers, contractors, the Walcha Council, the Walcha Motel and Apsley Pub were a great help. There would be too many people to name.

Over the next two and a half years Walcha Dairy was managed by John Crittenden and his sons Matthew and Aaron. All heifer calves where kept on farm and milk production grew.

By December 2009 stock numbers were now at 1150 head and extra room was required to ensure we could cater efficiently and effectively for all animals.

I inspected a few places that I didn’t think were suitable, then on a quick look at the Gidley property a few km north of the dairy on Thunderbolts Way I was able to agree in a very quick twenty minute lease purchase with owner Matthew Dunbar.

In the final days of December Pete Harrison and I mapped and pegged out the much smaller Giddley farm plan. Again, similar to the dairy development all new fences, subdivision water, troughs and pasture were completed.

Over this early period our Poowong friend and neighbor Callum Forbes and I developed all of the reporting systems that we still use on the farm today.

We have since completed an additional 40 ML dam north of the house on Thunderbolts Way. 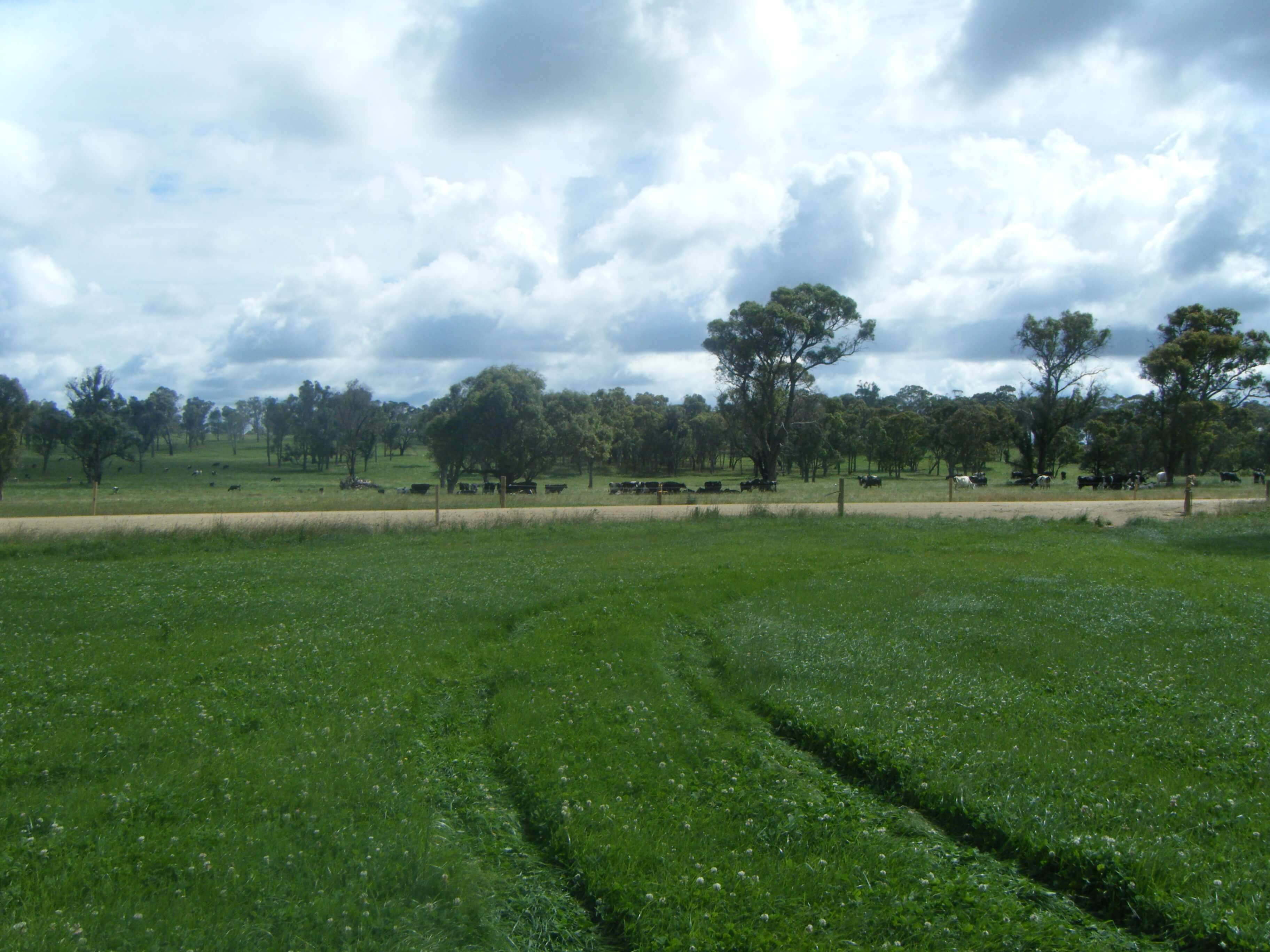 By February 2011, the enthusiastic Leon and Lynda McCabe had moved in as Farm Managers. They had worked with Elaine and myself at our Poowong Dairy farm previously. Stock numbers had increased from 1150 to over 1600 head.

A big blow soon after was the Down Down campaign Coles supermarket has introduced. In my view it was screwing farmers throughout the country. We had no chance to change our production model or sell cows, or make other plans to adjust to the significant drop in the value of our milk.

We sold a large amount of milk at around 12 cents per litre during the winter and spring of 2012 and for other reasons relating to this around 50,000 litres of milk was tipped out. This was a stressful period in the farm development.

We have had numerous visits from interested people and we have just signed a cooperative research agreement with the University of New England.

There has been considerable interest from print media, radio and Television. Hosting many groups we have spoken at the NSW Grassland and Australian dairy farmer conference twice the Terrapin World Agriculture outlook in Singapore Nuffield annual Tour New Zealand and American Farmers groups in NZ and California. 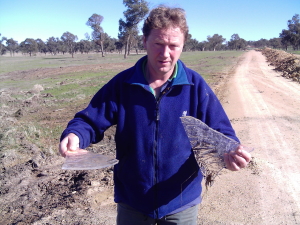 To this date November 18th 2013, Walcha Dairy has sold over 33 million litres of milk, each morning at around 4.30am the day begins with milking of our 800 strong milking herd and by the end of the day Walcha Dairy has producing enough liquid milk to feed appromxately 350,000 people per day.

Walcha Dairy History (2013 to now) will be available soon. Keep an eye out for it on facebook & on our Notman Pasture Seeds website.