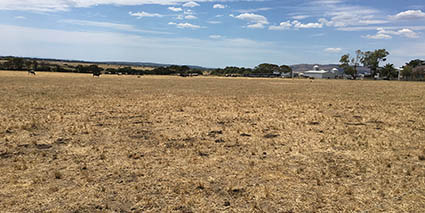 The aim on most farms would have to be more home grown feed, therefore achieving a greater amount of total energy harvested per Ha. With this in mind, the main ingredients for a successful pasture crop need to be:

These are the known factors that influence pasture growth and consumption. Any of these that are under your control need to be addressed.

Successful germination of seed depends on good contact between the seed and the soil to maximize soil moisture and nutrients. For both direct drilling and conventional sowing to ensure both seed and fertiliser are sown together at a depth of around 10mm.

Permanent pasture is still the mainstay feed of the Gippsland dairy industry and protecting pastures from over grazing and weed infestation is of upmost importance. There is great opportunity to increase yield in general but I believe in July growth rates of 40kg/ha should be achieved therefore achieving one tonne of pasture grown per month during this period.

Most root mat soils have low soil PH. If PH is below 5.4 in (water) apply 2.5 tonne / Ha of fine lime and incorporate this into the soil prior to planting. Not controlling existing pasture or not breaking down root mat often causes failures when direct drilling pastures.

The use of a high application rate of Glyphosate followed 10 days later by two passes with a disc, this could be followed by a power harrow and a seed box. The soil clump size should not be more than 5 cm. After sowing harrow with mesh and roll.

The planting window is wide for spray irrigation, from mid to late February to late April. The ideal timing to optimize the result is considered to be Mid-March for autumn.  If flood irrigation has a large amount of summer grasses e.g., Paspalum, Couch ECT cultivation after heavy Glyphosate application would be preferred, if spraying only then increase sowing rate by 50 %.

When there is no more than 15% of the area covered with fibrous rooted grasses and pasture cover is low spray pasture with Glyphosate at 150 ml/ha, the next day pasture can be drilled then irrigated. Around 8 to 10 days later this can be grazed. Fertiliser as per standard recommendations.

Past selection guides have often talked about when do you require the extra feed, winter or late in the season? Early seeding cultivars have often been suggested to be more persistent in dry environments. These early flowering grasses cease growing generally before moisture starts to decline. They have poorer quality and in many cases are 1.5 MJME lower than the later season cultivars. Main aim is to grow feed every day moisture is available.

With this in mind we are for Dairy mostly recommending late flowering cultivars for perennial ryegrass.

Culivars suitable would be Ultra Enhanced Ryegrass, Matrix, Base AR37 or in a mix with white clover in a Vatbuster blend.

These cultivars seed on average at least 21 days later than Nui and can remain at an energy content of 11.5 MJME even into the early December period. Early season cultivars like Kangaroo Valley would be close to 3 MJME/kg lower at this stage.

For annual pastures the same principle applies, however when cropping within six months of planting date, an early season cultivar could be used in this case.

WHY USE SHORT TERM RYEGRASS

Short team ryegrasses are generally used in areas where there is trouble getting persistence with perennials this could be mostly be caused by lack of soil moisture and or occasionally too much moisture causing pugging. Often farms where there is a calving pattern requiring a high winter feed requirement use long season Italian ryegrasses it’s important not to use Annuals unless cropping again next spring.

Italian Ryegrass – Use long season cultivars such as Surge or Megabite Premium. Excellent growth in Late Autumn, winter and early spring compared to Perennials.
Annual Ryegrass – Plant when quick autumn and winter feed is required and you are planning to crop in spring. Use Bullet or Winterbite