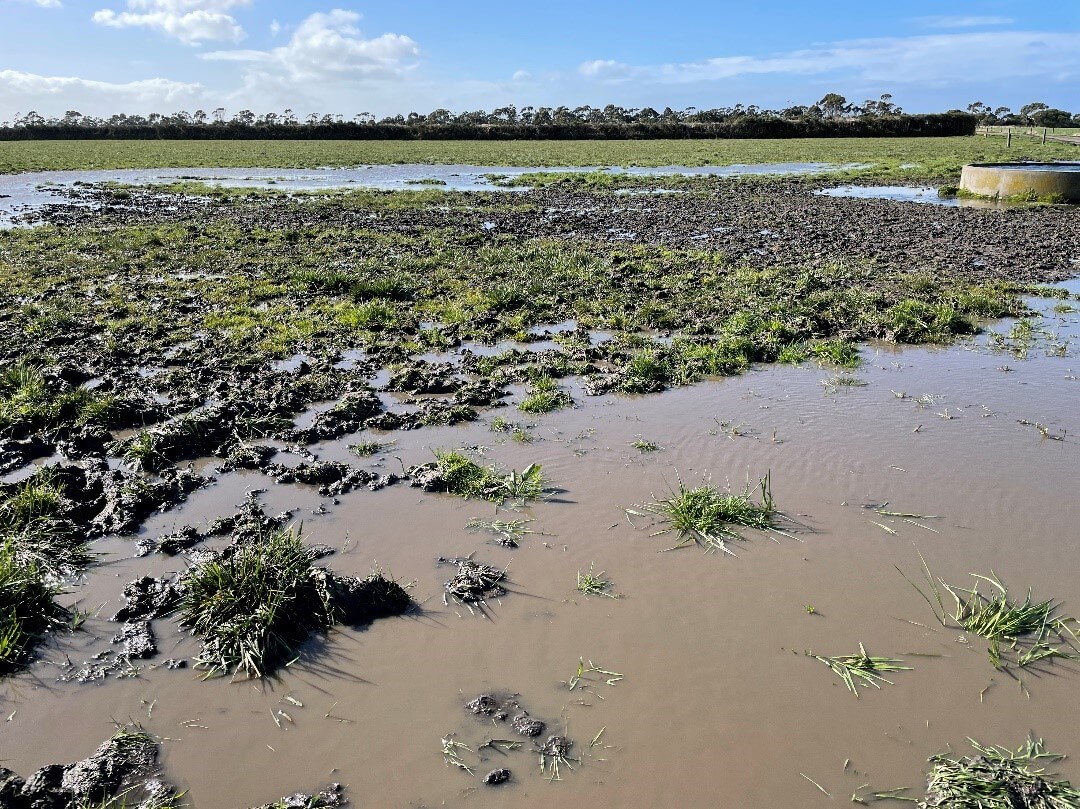 Despite the best efforts of many farmers, with the high rainfall in autumn, winter and early spring periods, soils have become saturated. This has led to severe pasture damage on a large number of farms in south-west Victoria and Gippsland. Recovery will depend on a number of factors, and when planning the recovery strategies best suited to your farm.

HOW DO WE ASSESS PASTURE DAMAGE?

Do your own classifications; you may need four groups (light, medium, heavy, severe)

Light – May have a number of options, from rolling when soil conditions are drying, this option is generally only available during a small window of time and on flatter type land.

Medium – Rolling or smudging, may look at over-sowing if plant density has been affected.

Heavy/Severe – This may require pasture Re-sowing or a complete renovation using either a crop grown for silage,
hay or summer crop

Very Severe – Often paddocks that may have been sacrificed or severely wet during rotational grazing. Will need to be
cropped or could go back to permanent pasture if clean of annual weed or can control spring germinating weeds (eg
fat hen, wireweed, stinging nettle, deadly nightshade).

KEY POINT – Roll, smudge or harrow as soon as soil is firm enough to drive on.

The improvement can be seen by filling the pug marks, distributing moisture more evenly thus improving pasture growth, the same timing’s apply for both harrowing and smudging.

As soon as soils begin to dry out, we have a number of options if you can roll on your farm. This can often be the answer for light to medium pugging on farms that are not too steep. The main point here is soils need to be dry sufficiently to hold the tractor (duel tyres may help if possible) and the roller has the effect of levelling the soil profile.

Topping up with pasture seed can be done after these jobs take place, but if they are severely pugged the seed may not germinate due to lack of seed soil contact.

This is an subject that could be debated for ever.

You would expect not to plant any more than 10% to 15% of your farm into summer crops as it can become difficult to feed large amounts of summer crops to the cows. The only exception we would consider is Chico Chicory has the option to be a grazing crop for an eighteen month period.

One of the main points is to try and be organised to get the job done at the appropriate time and in an efficient manner. Naturally on any farm you target the most damaged areas first, generally these could be the summer cropping targets with a Top Crop forage blend.

Summer grasses such as Shirohie Millet (animal safe) or Betta Graze sorghum (excellent cold start tolerance for southern Vic) can also be considered as they are fairly inexpensive.

If there are still further severe pugged areas and direct drilling is not an option, using a power harrow and re sowing to ryegrass such as Megabite ryegrass or Vatbuster in early spring can be achieved on some farms, your local knowledge needs to be considered.

Spring crops have different planting times, but most crops benefit from planting followed by harrowing and rolling.
The table below shows a general time frame for planting and grazing.